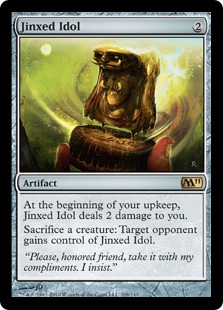 A Jinxed Idol looks like any other ordinary idol, 3" to 3' in height, made of wood, ceramic, copper, silver, gold, or the like, perhaps even encrusted with gems. It invariably, however, looks unpleasant to the eye, evil of cast or visage, homely and otherwise slightly unnerving. It radiates no magic, nor evil, should such be detect for by magic or otherwise, so well cloaked is the curse. It is also indestructible to normal physical and even most magical attacks. A Jinxed Idol can only be destroyed in the location that it was made (i.e., the carver's hut, the goldsmith's forge, etc.)

However, whenever it is claimed as treasure, then the curse activates. The target must make a Charisma saving throw against CL 20 or suffer the effects of the curse. The Curse of the Jinxed Idol deals 1d3 points of Constitution damage to the target every week (once initially when the curse takes effect, then every seven days thereafter). While so cursed, the target cannot heal Constitution points suffered in this manner. There are only three ways to lift the curse:

1) Application of a remove curse spell cast by a cleric of 18th level or greater, which lifts the curse from the target though does not destroy the idol; or

2) The cursed being must purposefully and with malice sacrifice a living and intelligent being to the idol. If the sacrifice is of Good alignment and Pure, the original victim may immediately choose a new target for the curse (said target need not be visible, but must be on the same plane); or

3) Destroy the Jinxed Idol in the location in which it was made; this requires no special magic, though finding the location may require no few spells, consultation with sages, or research into legends and lore.

Once the curse is lifted, the victim will heal the damage from the curse as normal.

Magic Card a Go Go: Every day, or thereabouts, I'll look up a random Magic: The Gathering card or three on Gatherer and devise a background and some rules. Why? Mostly because it seems like fun. When it is no longer fun, then meh...
Posted by James Mishler at 12:23 AM